“TSUKI no HYAKU SHI” by TSUKIOKA YOSHITOSHI is a series of 100 nishiki-e that was published in 1885 to 1891.
The remarkable point of this series is that the moon appeared in the every print.
The series dealed with varied historical story in Japan.

This piece is titled “Gosechi no Myobu”.
The word Myobu means women follow ranked fifth or higher in the imperial court.
The woman threw away the position in the court and then turned to be a nun.
This piece depicts the nun playing Koto (Japanese zither) and two men from the imperial court were stunned to the performance.
This is said that he man crying was Minamoto no Toshiaki (1044-1114), a noble in the Heian period. 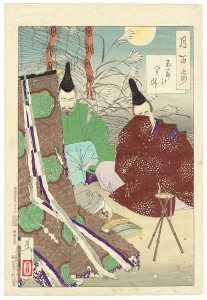 If you’re Interested, please check our eBay listing for the detail.